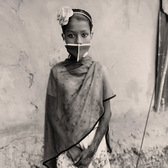 Stay up to date, be part of a community and show your support.

A year ago, on 22nd March 2021, the Rohingya camps witnessed a massive fire. 9500 refugee shelters we